I can think of a million reasons why everyone must travel to Jerusalem at least once in their lifetime. It is the only place, I’ve visited, where I felt my existence align with the truth of what was and what is. The first wave of consciousness was so precise I could pinpoint the moment when it occurred – inside the Church of the Holy Sepulchre as I stood next to the presumed tomb of the burial and resurrection of Jesus. It had dawned on me that Mary Magdalene (a woman whose life has intrigued me all my life) may have taken the exact steps I had just taken and stood where I now stood. The second wave rushed over me as I poised myself on a flat roof overlooking the Temple Mount. Its walls running from Mount Moriah, the very place where Abraham was asked to sacrifice his son, to Mount Zion. The ridge of Mount of Olives glimmered to the left of me and the Garden of Gethsemane was behind me. A mellow, euphoric Islamic call to prayer drifted over the Jewish cemetery on the Mount of Olives containing over 300,000 tombs. The sun burned into my skin and I squinted my eyes to stop myself from weeping under the immense burden of undeniable realisation. It’s impossible to visit Jerusalem and not be profoundly moved by it. It is simply impossible.

On my visit I was fortunate enough to have the service of a guide, Shelly Eshkoli, who incidentally happened to be a scholar. Her subject of speciality? Biblical women. Life is all about being at the right place, at the right time but more importantly with the right people. On our walk across the court of the Church of the Holy Sepulchre Shelly informed me that the Byzantine period was a time when women were not respected. The intention amongst scholars and society alike was to elevate the status of men. Hence the role of Mary Magdalene in the life of Jesus was trivialised and her character fired upon and called to question. In 2016 Pope Francis elevated the status of St. Mary Magdalene signing a decree formalising her as an Apostle of the Apostles.

The Stone the Builders Rejected has Become the Cornerstone

It would be foolhardy to ignore the interconnectedness of the narrative of Biblical times to what IS in Jerusalem. The city is an active dig with only 10% of it having been excavated so far. So we watch in awe as the history of mankind unfolds. In the same way that St. Mary Magdalene acquired due justice today there is hope that we too may be exalted 2000 years from now.

For the time being however, we must first show gratitude for what is before us. The City of David has found a way to ennoble the stone that is rejected and it is being offered to the rest of the world. Israel’s most prominent artists have come together to create a collection of jewellery inspired by the archeological artefacts unearthed in Jerusalem. Each item tells the story of one of the most sacred places on earth. What is significant is that the glass used in the pieces are Roman glass taken from fragments of  vessels and kitchen ware unearthed from excavation sites that would otherwise be discarded. The pieces are ablaze with deep colour from prolonged contact with minerals underground. Whilst they appear ethereal remarkably, it is the single thing that they are not.

Rings, necklaces, earrings and bracelets have been designed inspired from finds such as a single gold earring set with pearls and precious stones discovered in the Tyropoeon Valley excavation. It is believed to have belonged to a woman of prominent stature due to its quality and use of precious metal and stones. Another is a silver amulet upon which The Priestly Blessing from the Bible (Numbers, Chapter 6) was inscribed. It is the earliest archaeological evidence of verses from the Bible. It was found in a burial cave rolled together with another tablet at Ketef Hinnom and has been dated 7th century BCE. The list of inspiration continues in the same vain with each more captivating than the other.

It is a phenomenal collection of immense significance and one that can in no way be trivialised as mere jewellery. Every piece evokes the feeling of an offering from the past. Each has a sense of a calling to belong and to connect. I for one am humbled that I was deemed worthy to bear this message to you.

The collection is available online at – https://store.cityofdavid.org.il/ and also at the City of David gift shop at the Visitor Centre located at: Maalot Ir David, City of David, Jerusalem.

A proportion of the profits from sales is returned to the City of David to fund continuing excavations.

Chef’s Table Tour, Madrid. How does that sound? Delectable? Seductive? Enticing? Well, I can unflinchingly tell you that it was all three and more. It was fun, it was laughter, it was good food shared with the finest company entwined into unparalleled delight. An impeccable weekend with Luxury Travel Advisors in Madrid was the most exhilarating gastronomic journey.

Re-inventing the wheel isn’t a task many would choose to undertake especially, given that the bar has been set very high. So what kind of a person (or two) would take up such a barmy challenge AND win?  I give you Andy and Benno ladies and gentleman! Two travellers with over 60 countries explored between them who after a few drinks concluded that it would be a great idea to re-invent the humble…beach towel.

Sri Lanka is enjoying unprecedented levels of tourism as Asia’s leading tourist destination at present. Colombo, the commercial capital, is relishing the best part of this new influx of visitors. Luxury hotel chains have taken over the coast line and there is an air of jubilance as Colombo enjoys what has eluded many – the end of a war. In fact, hardly anyone mentions the war any more as there is too much to look forward to in what is arguably one of the most exciting times in its history.

This is the city I was born and raised in for 13 years. As such, returning here feels akin to a pilgrimage. I celebrate new Colombo’s ever-evolving landscape as a tapestry which unfolds at each visit.

ON14 Rooftop Bar and Lounge

Ozo, Colombo remains one of my favourite places in the city. The hotel sits on scenic Marine Drive which runs 3.6km along Colombo’s coast. The rooftop pool here offers views across the ocean on one side and the Colombo skyline on the other. Sit here from sun rise to sun set and you will still never be bored. With striking views across Colombo, a roof top lounge and bar serving perfect breakfast, brunch, lunch AND dinner accompanied by phenomenal cocktails you’d be hard pressed to find anywhere more suited for watching over the city.

As the sun goes down ON14 Rooftop Bar and Lounge serves palatial cocktails and rich, exquisite food. I spent a wonderful evening here and enjoyed the most delightful chicken and barracuda dish. It was sublime on the tongue. Served with a perfectly chilled rose´ from the bar’s extensive wine list I couldn’t think of a better way to round-up my evening.

However, I couldn’t leave without ON14’s traditional chocolate biscuit pudding. It was a wonderful nod to Sri Lankan cuisine. This childhood favourite was served with an adult twist of strawberries, white chocolate and fresh mint leaves and  I could have easily eaten one more.

Five Things You Must See Around Ozo, Colombo.

Ozo, Colombo is perfectly located for exploring one of the most authentic parts of Colombo. A 10 minute taxi journey will take you to Colombo Fort which is an area of the city fraught with history. Its proximity to Colombo Harbour which has served as a port for over 2000 years carries a colossal bearing to the way Colombo Fort has evolved over centuries.

Here are my top five picks of things to see in Colombo Fort. 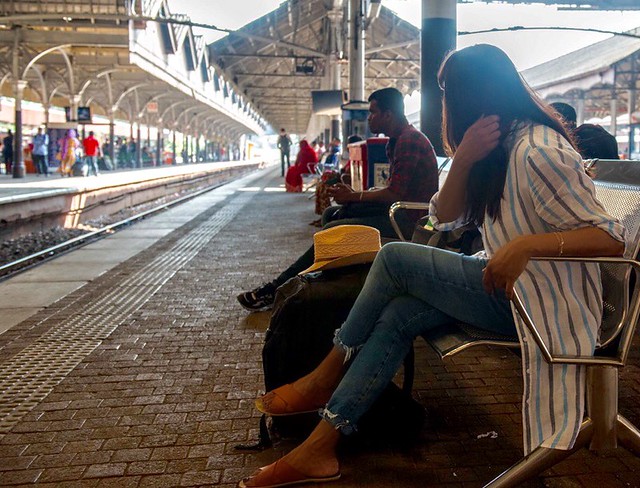 Fort Railway Station connects the capital’s rail network to the rest of the country. Even if you have no intention of taking a train from here the station itself is worth a visit. It opened in 1917 and has retained most of its original charm from wooden counters and ceiling beams to quaint purple train tickets. I bought a platform ticket for Rs. 15 which allowed me to walk on to any platform (but not board trains) and see inside the station. It’s an exceptional place to experience an unadulterated insight into the cultural diversity of Colombo. It’s also undoubtedly one of the busiest places in the city.

Colombo Fort Clock Tower (1857) also known as Khan Clock Tower at the entrance to Pettah Market is the starting point for measuring distances from Colombo to the rest of the country. It is effectively, km zero for Sri Lanka. When it was first constructed it was the tallest structure in Colombo and even served as a light house until 1952 and only ceased this duty after other surrounding buildings obscured its view.

In more recent times, during the civil war, the area surrounding the clock tower was a high security zone. The tower was not accessible until 2015 when roads reopened to the public. 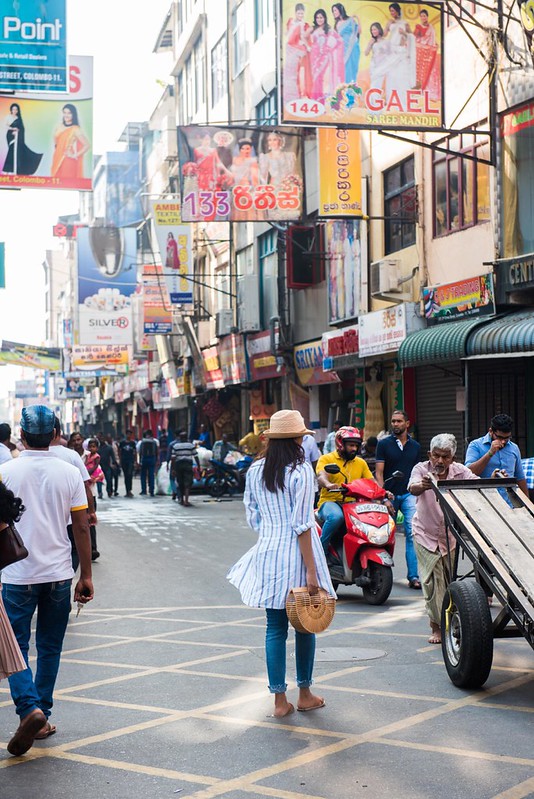 Pettah is a multi-ethnic district of Colombo within a short distance of Fort Railway Station. Pettah Market has always been here due to its proximity to Colombo Harbour. Very few tourists go to this market and it’s frequented by locals for their daily needs. So a visit here is as an authentic an experience as you could ever want.

I walked the labyrinth of streets within, each dedicated to a different trade including clothing, fruit and veg, fish and seafood, electronics and even gold jewellery. The noise, the crowds and the aromas were overwhelming and a little stray dog accompanied me everywhere. There is plenty of street food here too if you’re peckish and brave. Get here before nine o’clock in the morning before the heat of the sun hits the streets.  It’s far less crowded than too and makes walking around relatively stress free.

Travel bloggers have already made this magnificent mosque famous due to its striking red and white brickwork. It was built by the Muslim community of Pettah in 1909. Today it’s become a Colombo landmark amongst the travel community.

If you plan to visit, as with all places of worship, you will need to be dressed appropriately. I was able to walk into the corridor of the mosque but not enter any of the prayer rooms. Enjoy the stunning architecture which rises from the inner courtyard up several storeys towards the sky.

This old Dutch hospital building which dates as far back as 1600s is the oldest building in the Colombo Fort area. The hospital was set up to serve the health and well-being of the workers at the Dutch East India Company and seafarers from Colombo Harbour during the occupation of Ceylon.

Today, its architecture has been preserved and it’s a shopping and dining precinct. There are shops, restaurants and cafes served by two open courtyards. In the evenings there is live music and the many restaurants serve dinner under the stars.

In collaboration with Ozo, Colombo and Ozo Hotels. Prices for a Dream Room at OZO Colombo Sri Lanka start from approximately £76 per night (B&B) exclusive of VAT and service charge. For more information or reservations, visit www.ozohotels.com/colombo-srilanka.